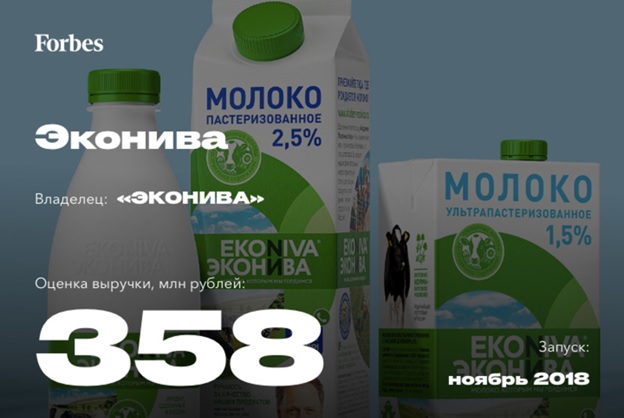 ‘EkoNiva Group has ambitious plans aimed at becoming “Russia’s leading fully integrated producer of high-quality dairy products”, as stated by its President Stefan Duerr. To accomplish this objective, the company is expanding the processing capacity, particularly in the Black Soil Region. The milk products under the new brand are now available at many chains in Moscow – Globus, Auchan, Da!, O’KEY and Karusel (part of X5 Retail Group)’, note the Forbes experts.

When compiling the long list of brands, the choice of the biggest retailers, branding and advertising agencies was taken into account. They expressed their opinions as to the trademarks launched in 2018 that are most popular with consumers and professionals. The evaluation of the brand’s success was based on the ratio of the revenue for the first nine months of 2019 to the number of points of sale where it is presented. Allowance was made for the fact that the brands belonged to different categories, and to bring them to a common standard, their indicators were compared to those of the leaders in the corresponding category. The data on the revenue of the leaders in specific categories and some of the brands was collected by Romir research holding with the use of its Consumer Scan Panel.