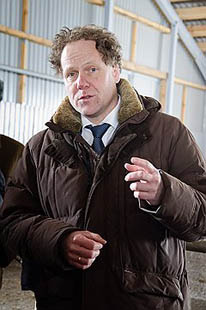 The parent company of Russian agricultural corporation EkoNiva has completed placement of a five-year bond in the amount of 50 mio euro on the Stuttgart Stock Exchange. The company states that part of this amount will be invested into construction of two dairy complexes in Voronezh region with a capacity of 2 thousand head each. The estimated total value of the complexes is ca 35 mio euro. The analysts remind that the payback period for dairy projects can be up to 10 years.

Ekosem-Agrar GmbH, parent company of EkoNiva-APK Holding Group established by a German entrepreneur Stefan Dürr, completed the placement of a corporate bond on the Stuttgart Stock Exchange on Monday. The issue volume amounted to EUR 50 mio, the coupon rate — 8,75% per annum. The bond issue was arranged by DZ Bank (cooperative commercial bank of Germany) and Equinet Bank AG, one of Germany's largest independent brokers. Stefan Dürr, Director General of EkoNiva-APK Holding stated that he considers the bond placement of such issue volume a great success. ‘It signifies, among other things, that there is a favourable investment climate in the Russian agricultural sector’, said Stefan Dürr. According to Mr. Dürr, the company will use EUR 30 mio of the proceeds from the bond issue to optimize its financing structure and EUR 20 mio to finance its continued milk production expansion.

Deputy Financial Director of EkoNiva-APK Holding, Sergey Lyashko specified that the further development will include construction of two dairy complexes with a capacity of 2, 000 head each in Liskinsky and Kamensky districts of Voronezh oblast. He asserted that the objects will be constructed in successive steps on the company’s own land, each land parcel occupying 85 ha. The first phase of each project implies construction of technological premises and a farm for 1,000 head. The first phase of the projects will be put into operation in the fourth quarter of the current year. The investment volume at this point will amount to 70% of the total project investment. The second phase of the project is to be commissioned in the third quarter of 2013’, explained Mr. Lyashko. He stated that the annual production volume per 1 dairy complex will amount to 17.1 thousand tonnes of milk, the total value will make up 700 mio rubles. ‘We are planning to invest 20% of our own resources, received from the bond issue; the remaining amount will be obtained from the Central Chernozem Bank of Sberbank of Russia in form of a loan’, said the Top-Manager.

Agricultural enterprises of EkoNvia-APK Holding operate in Voronezh, Kursk, Kaluga, Orenburg, Novosibirsk and Tyumen oblasts. The total agricultural land area is 160 ha, of which 121 thousand ha is arable land. The gross yield of grain in 2011 reached ca 100,000 tonnes; the yield of sugar beet was 117,000 tonnes; the yield of corn - 51,000 tonnes. Fresh fodder production amounted to 343,000 tonnes. The total number of livestock is 30,200 head, of which 12,200 head are dairy cows. In 2011, EkoNiva-APK Holding produced 50 mio litres of milk and sold 1,000 tonnes of beef.  The company’s activity areas include field crops production. The group’s 2011 turnover reached EUR 38,6 mio.

According to the data of the Department of Agricultural Policy of Voronezh oblast, the total amount of raw milk produced by enterprises of Voronezh oblast in 2011 stood at 332.2 thousand tonnes which exceeds the amount produced in 2010 by 4.5%. The total number of cows kept at the enterprises in 2011 reached 80.6 thousand head which also exceeds the 2010 number by 4.5%. As of March 1st of the current year, the gross volume of raw milk produced in Voronezh oblast amounted to 53.6 thousand tonnes (which shows a 15% increase in comparison with the previous year’s level). Among the largest milk producers in the oblast, the Department named EkoNivaAgro, LLC (a company within EkoNiva-APK Holding Group); Agrofirma Mayak, LLC (part of Dominant Group); Agricultural Production Cooperative “Liskinsy” in Liski district; Vostock Agro, LLC in Rossoshansky district; “Druzhba” Stock-breeding Plant, CJSC; Vostok-Agro, and Rassvet, CJSC in Pavlovsky district.

Andrey Danilenko, Chairman of the National
Dairy Producers Union noted that the capital recovery time in dairy farming constitutes at least ten years. ‘At the same time, the investments into raw milk production will be profitable in the long term. Over the past two years, there has been practically no serious investment into dairy farming while large amounts have been invested into processing. We predict a rapid demand growth; in the nearest years, there will be a deficit of raw milk in the market’, commented Mr. Danilenko.

‘In general, the bond issue was quite successful. However, it can be said with certainty that but for its German “roots”, EkoNiva would hardly have been able to raise 50 mio euro in its debut five-year bond issue with a 13% ruble profitability after the currency swaps’, noted Dmitry Dorofeev, analyst of BKS Financial group.